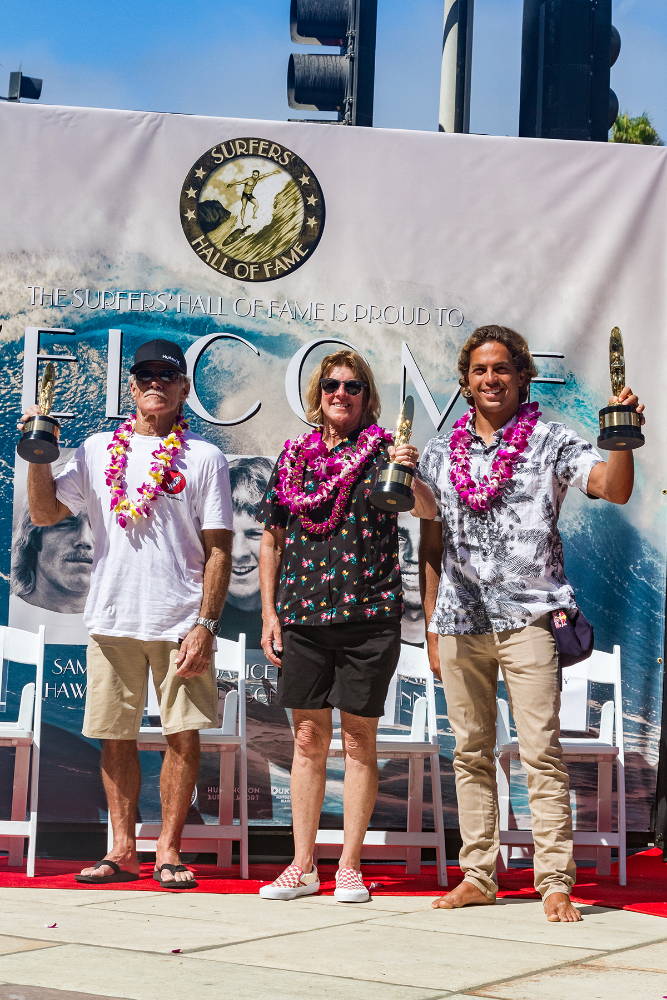 HUNTINGTON BEACH, Calif. – Friday, August 2, 2019 – The surfing world turned out in force today to honor 2019 Surfers’ Hall of Fame inductees Sam Hawk, Janice Aragon and Kai Lenny. All three now have their hand and footprints immortalized in cement for the ages in front of Huntington Surf & Sport at the corner of PCH and Main Street.

Sam Hawk was a standout power surfer in the 1970s and part of the renowned Hawk surfing clan that includes Tom and their late brother Chris. Janice Aragon was winner of the ISA World Surfing Games and NSSA Nationals and current executive director of the NSSA. And Kai Lenny is a champion big wave surfer, stand-up paddle surfer and racer, surfer, tow-in surfer, windsurfer, kitesurfer and overall watersports enthusiast.

The ceremony began with the traditional blowing of the Pu or Conch Shell to chase out the bad vibes and welcome the good. Sher Pai, wife of Surfers’ Hall of Fame founder Aaron Pai, followed with a passionate prayer blessing the trio of inductees and everyone in attendance. Huntington Beach Mayor Erik Peterson added, “Surfing is in our DNA. This tradition (the Surfers’ Hall of Fame) is something that we all love. It’s just a blessing that we have it here.”

Former pro surfer and event emcee Todd Kline, formally introduced Aaron Pai and the festivities were underway. “AP” wished his mother a happy 92ndbirthday and thanked his sons Trevor and Taylor along with daughter Ashlyn. He then greeted the industry, surfing royalty, dignitaries and the inductees themselves. Sam, Janice and Kai, you guys are about to get a little concrete on you. Hope you don’t mind!”

Eternal grom Pai told the crowd that when he was a kid in Junior High School that, “Sam Hawk swam around the pier in a Speedo during the winter to train. Janice dedicated her life to raising the bar. She’s been a machine. And Kai, he’s the greatest waterman of all time, taking the world of surfing to a new level.”

The first inductee was Sam Hawk. Born in 1950 in South Gate, Hawk first started surfing at age fourteen in Huntington Beach. As one of the renowned Hawk surfing clan that includes Tom and their late brother Chris, Sam helped shape the local surf culture in the 1960s and '70s. He moved to the North Shore of Oahu, Hawaii in 1967 and by 1971 had firmly established himself as the most advanced regular footer surfer at the Banzai Pipeline as well as a key pacesetter at both Sunset Beach and Rocky Point. Known for riding massive waves with complete and startling abandon, Sam finished fourth at the 1972 Pipeline Masters contest and placed third in the 1974 Duke Kahanamoku Invitational Surfing Championship.

Next up was Janice Aragon. Born in 1955 in Fresno, California, and raised in Downey, Janice began surfing at age 15. A relative late bloomer to competitive surfing, Janice entered and won her first surfing contest in 1983 at age 29. Aragon was the mother of a two year-old daughter and an unheralded competitive surfer when she won the 1984 ISA World Championships in her hometown of Huntington Beach, helping lead the U.S. to a team victory. Janice had a second child in 1985, and the following year won the National Scholastic Surfing Association (NSSA) Nationals, one of amateur surfing’s most prestigious events.

The final inductee was Kai Lenny. Born on October 8, 1992, Lenny’s parent’s dipped him in the Maui shorebreak before his first week on earth was complete. His skills as a waterman exploded soon thereafter. Lenny, whose name is derived from the Hawaiian word for ocean, learned to surf by age five, windsurf at six, stand up paddle at seven and kite surf at nine. He had his first sponsor before age 10. Lenny’s mentors include windsurfing legend Robby Naish and big wave greats Laird Hamilton and Dave Kalama. Lenny is already one of the world’s most accomplished watermen.

The Surfers’ Hall of Fame celebrated its first induction in 1997 inside of specialty retailer Huntington Surf & Sport where several slabs remain. Four years later with the blessing of the City Council and a stunning bronze statue of sport’s spiritual leader Duke Kahanamoku serving as a backdrop, the ceremony moved outside to the corner of PCH and Main; less than 100 feet from the famed Huntington Beach Pier, site of the U.S. Open of Surfing.Text 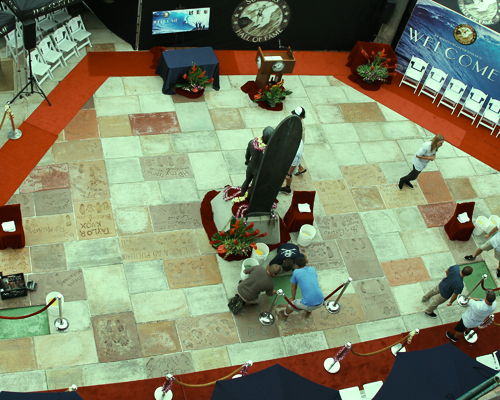 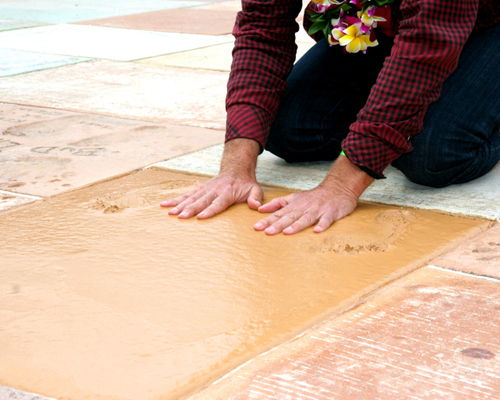 Styled after the famed Grauman’s Chinese Theatre in Hollywood, which Aaron Pai visited as a youngster, the Surfers’ Hall of Fame is intended to “connect the generations of surfers with a lasting tribute and permanent public showcase for the achievements of those who have shaped and revolutionized the sport,” said Pai. The standing room only crowd on induction day is testament to the landmark’s popularity and the surfing community’s acknowledgment of their heroes.