Brett Simpson, the son of a former pro football player who became
the first back-to-back winner of the prestigious U.S. Open of Surfing, won “Rookie of the Year”
honors at the Triple Crown of Surfing and was twice named the Orange County “Surfer of the Year” is among three legendary surfers being inducted into the the 2018 Surfers’ Hall of Fame. 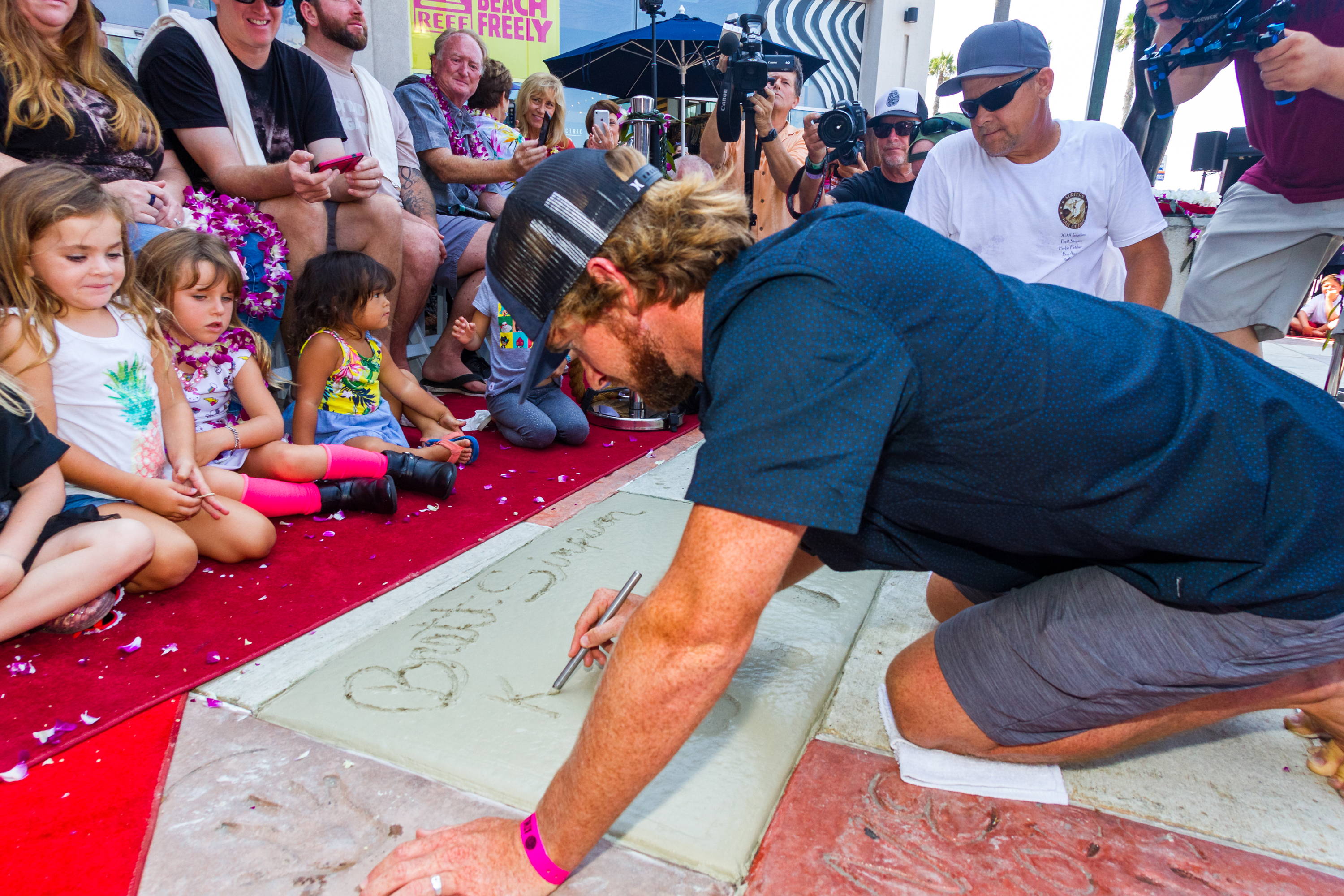 Born on January 5, 1985 in Long Beach, Brett “Simpo”
Simpson grew up in an athletic family where sports like
football, basketball and baseball were second nature. His
father, Bill Simpson, was a tough defensive safety with the Los
Angeles Rams in the 1970s and later with the Buffalo Bills.
Stories of performing under pressure with big money on the
line were par for the course. Bill’s highlight reel included a
clutch last-second interception in the wildcard playoffs that
guaranteed his team’s victory. Brett absorbed the moment.
Brett played youth sports – mostly baseball and basketball – while growing up in Garden Grove.
When he was 12 years old, Brett and his friends decided to give surfing a try. He had a rough
start, but the challenge of this new sport intrigued him. Although the family lived inland, Brett
managed to surf several days each week making each session count. At 13, he told his dad that
he was going to drop everything else and concentrate on riding his surfboard. And Bill encouraged
his son to focus on surfing.

Brett’s style caught the eye of Andy Verdone, legendary coach of the Huntington Beach High
School surf team. Simpson transferred to Huntington High during his junior year. Simpson
became a local star, riding the break on the south side of the Huntington Beach pier.
Brett surfed in National Scholastic Surfing Association contests, then after graduation turned pro
and began to compete in the professional qualifying series. By 2005 he had won “rookie of the
year” honors at the Hawaiian Triple Crown of Surfing and was the 2008 and 2009 ‘Orange County
Surfer of the Year’ award recipient.

Brett’s career reached stratospheric heights when he defeated
reigning two-time World Champion Mick Fanning to win the
2009 US Open of Surfing title and its unprecedented $100,000
prize. Brett was mobbed in knee deep water by friends, family,
fans, and security guards. Hoisted onto their shoulders, Brett
looked like he was at a concert crowd surfing back to the stage.
The victory and accompanying points, not to mention the
confidence builder, helped him qualify for the 2010 elite World
Championship Tour.

Simpson accomplished the unheard of in 2010, taking down then nine-time world champion Kelly
Slater and the world’s number one rated surfer, South African Jordy Smith, to become the first
surfer to win back-to-back U.S. Open Championships and pocket another $100,000 check.
Brett Simpson spent six years competing at the world elite level, traveling across the globe for
competitions. Though still competing, he’s spending more time closer to home, giving back to the
sport he loves by coaching and bringing up the next generation in Huntington Beach. Now 33
year’s old, Brett is married to wife Danielle and the couple has two groms. 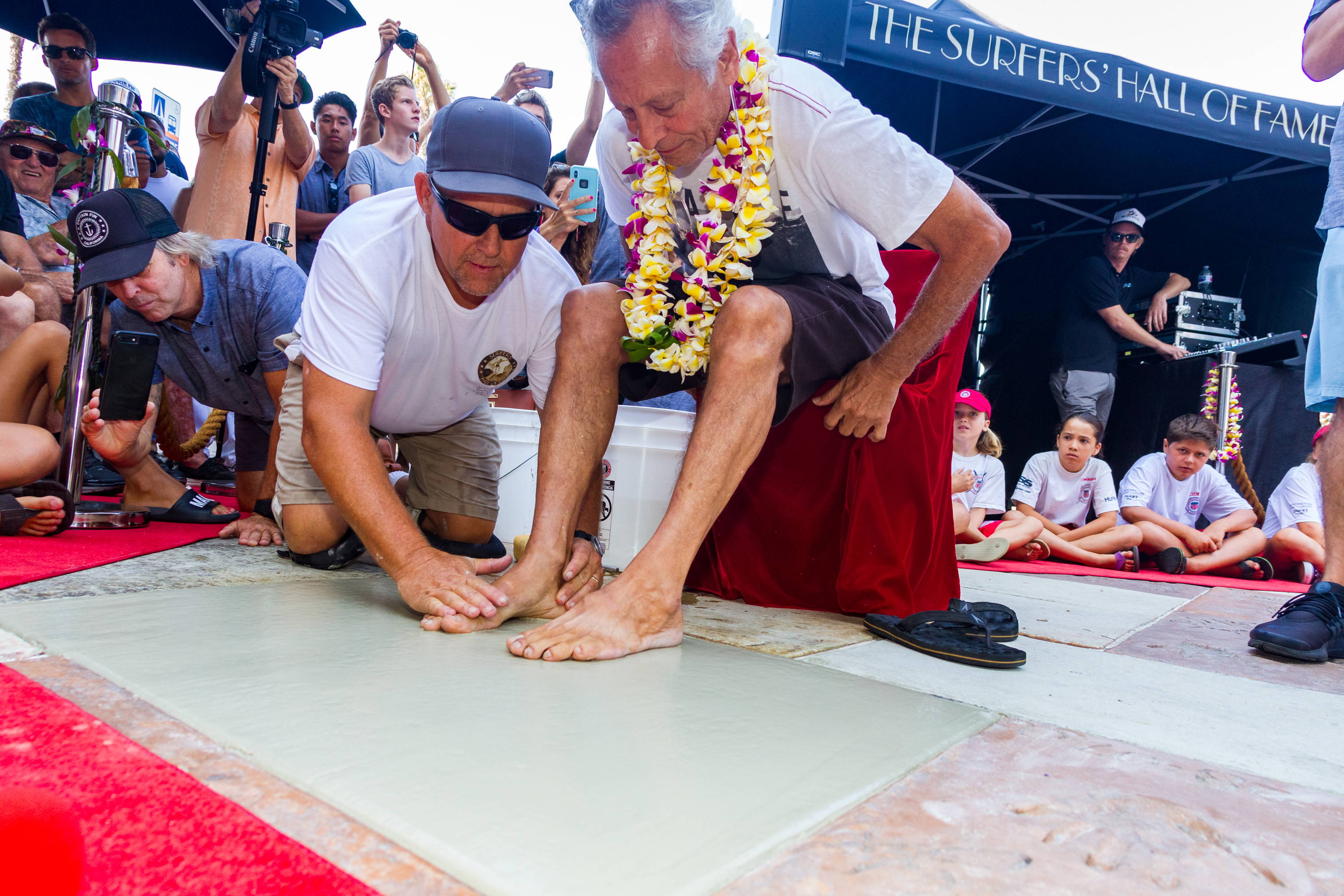 Born in Pasadena in 1948, Herbie Fletcher began surfing at age nine. An alumnus of Huntington Beach High School, he was a semifinalist in the 1966 World Surfing Championships. By the end of the 1970s, Herbie had purchased Astrodeck (a maker of non-slip coatings for surfboards), founded Herbie Fletcher Surfboards in Dana Point and was among the leaders of the longboard resurgence. His creation of a peel-and-stick version of Astrodeck turned the brand into the sport’s best known accessory utilized by nearly all of the world’s top surfers.

In the mid 1980’s Herbie Fletcher ventured into surf videos, releasing Wave Warriors, a series of promotional videos for Astrodeck followed by theAdrenaline Surf series. In the winter of ’85, Herbie gathered together surfers and surf photographers in front of his house at the Banzai Pipeline for the first of what has become a three decade long tradition to promote his latest film. The images have become an iconic collection chronicling surf’s unique history.

Herbie was on the vanguard of the tow-in surfing movement, riding 25-foot waves at Waimea Bay on his Kawasaki Jet Ski. When he started launching his modified Jet Ski in front of his house at Pipeline, it would prove to be a game changer.

Fletcher had been towing son Christian into waves on the California coast since 1976, but flying over mountains of water at Second Reef Pipe and speeding down the line at Maaleaa opened a new frontier, giving surfers access to monster waves that had been considered unridable before. In 1987, years before Laird Hamilton popularized the technique, he towed in Martin Potter, Tom Carroll and Michael Ho into 12-foot waves at Pipeline.

Leader of the Fletcher surf dynasty, Herbie’s wife Dibi is daughter of surf industry icon Walter Hoffman and sister to two-time World Champion Joyce Hoffman. “As a husband and soul mate, I knew the moment I met him on the beach at Makaha when I was thirteen, he had the greatest imagination,” she stated. “It hasn’t been easy livin’ a life going against the grain, it’s been fantastic!”

Herbie encouraged his oldest son Christian to take his skateboarding maneuvers into the surf, when all others scoffed at the idea, and expose the world to aerial surfing. While Fetcher’s fearless approach to big wave exploration infected son Nathan with an enduring passion to push the limits in surfing, skateboarding, motocross and snowboarding. Both were shamelessly promoted in their father’s videos.

As a grandfather, Herbie’s love for skateboarding and his surfer’s approach to conquering concrete terrain was naturally engrained in grandson, Greyson, while his enthusiasm for surfing and art is already influencing grandsons, Lazer and Jetson, as they start to discover their own paths to adventure and fun

Ben Aipa, the legendary Hawaiian surfer and shaper, founder
of founded Aipa surfboards in 1970, inventer of the double-edged swallowtail and split tail
designs and informal coach and trainer to top surfers Michael Ho, Sunny Garcia and Brad
Gerlach is among three legenday surfers being inducted into the the 2018 Surfers’ Hall of
Fame.

Legendary Hawaiian surfer and shaper Ben Aipa was born in
Honolulu in 1942. The son of a sugar plantation worker, Aipa was
the ultimate athlete. While he excelled at football, Ben also was a
competitive swimmer and natural waterman, much like his idol
Duke Kahanamoku. Following high school, he pursued a career in
semi professional football. His stocky build, 5’8′′ and 240 lbs at
the time, allowed him to excel as a linebacker, fullback and center.
His career in football ended prematurely with an ankle injury.
Looking for something new to do in paradise, Ben and his cousin
chipped in and rented a surfboard and ventured into the white
water at Waikiki in 1964. Already an accomplished swimmer and
bodysurfer at the time, Ben paddled out for the very first time at
age 23. “I took off on my first wave, stood up and rode it the whole way.” Aipa went on to surf
365 straight days.

Utilizing the same grit and determination gleaned from football, Ben entered his first contest in
1965 at age 29...and won. In 1966, a mere two years after he first paddled out, Aipa was a
finalist in the Duke Kahanamoku Classic at Sunset Beach.
Although one of the era’s fiercest looking competitors, which allowed him to get virtually any
wave that he wanted in the crowded Hawaiian lineup, Aipa learned to augment his strength
with agility and finesse. He went on to finish fourth in the 1967 Makaha International and and
the 1975 Lightning Bolt Pro. He also competed in the 1968 and 1970 World Championships.
“There’s a silently powerful presence about him,” Surfer magazine said of Aipa in 1972.
LEGENDARY HAWAIIAN SURFER & SHAPER

However, it's as a surfboard shaper that Aipa has made his most
significant mark in the world of surfing. In 1966, as the size and
shape of boards were evolving grom the traditional “tankers” to
shorter boards, Ben began shaping. He made the board that fellow
Hawaiian Fred Hemmings used to win the World Championship in
1968 and founded Aipa Surfboards in 1970. Ben invented the
doubled-edged swallowtail design in 1972 and followed this with the
split-tail design in 1974. Ben Aipa was pumping a newfound energy
and innovation into Hawaiian surfing.

In the early ’80s, Aipa began producing a slightly smaller updated version of the longboards he
and the rest of the sport had left behind 15 years earlier. “I was targeting the guys who were
getting married and had less time to surf and weren’t in the best of shape,” Aipa told
Longboard magazine in 1999. “They needed a board that could catch waves.” Surfer
Magazine called him “the hottest 56-year-old surfer in the world” in 1998.
Aipa has served as an informal coach and trainer to such top surfers as Michael Ho, Larry
Bertleman, Buttons Kaluhiokalani, Mark Liddell, Sunny Garcia, Brad Gerlach, and Kalani Robb.
Aipa won the grandmasters division of the 1989 United States Surfing Championship and the
legends division of the 2000 U.S. Championships. Ben was named one of the Top Ten
Shapers of All-Time by Surfing magazine in 2004. Both his sons Akila and Duke Aipa also are
accomplished surfers and surfboard shapers. 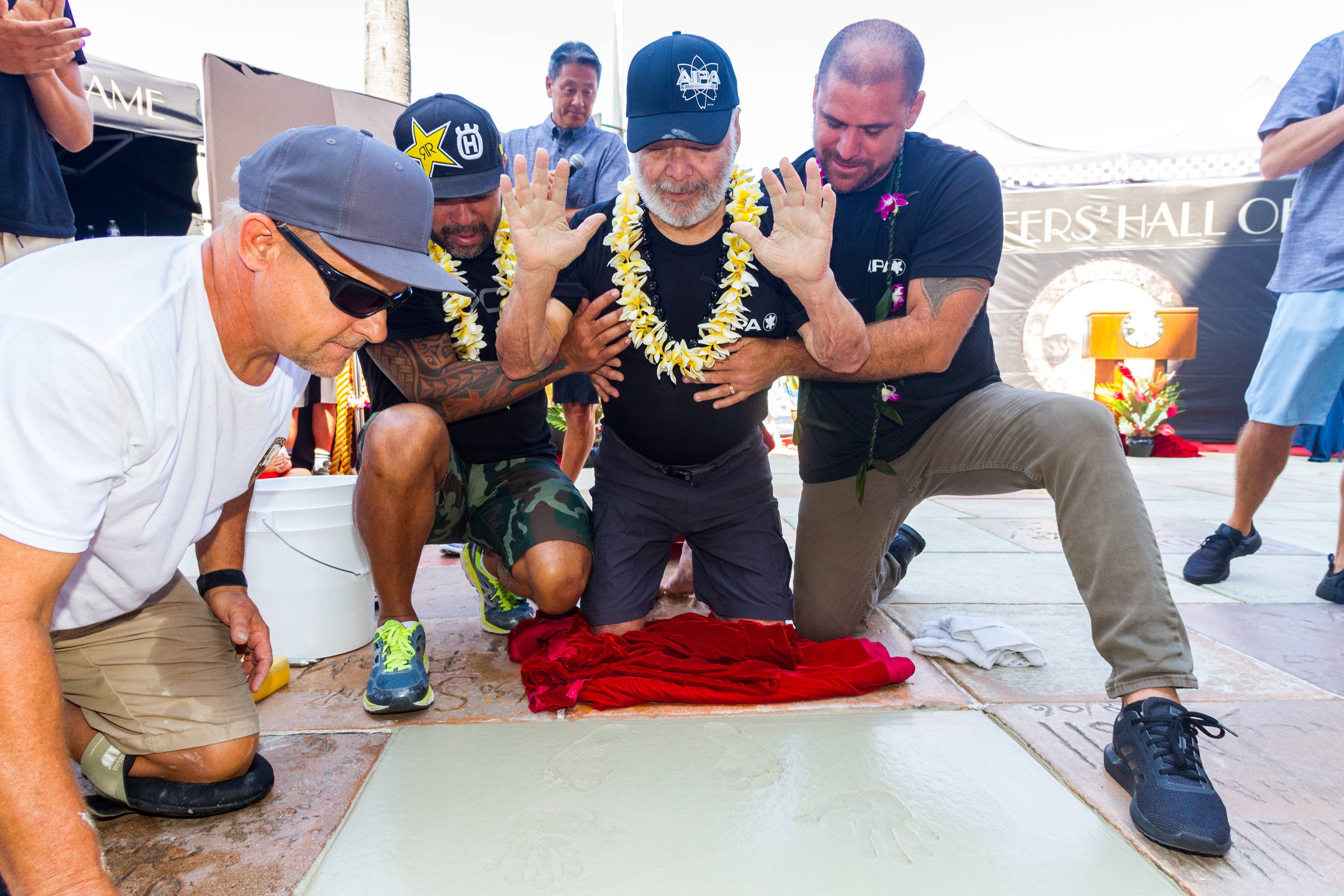